We’ve come a long way since those early days… What began as a few caravans sited along a dusty lane in 1976 has blossomed into one of the county’s most popular destinations for touring, camping and caravan holidays. 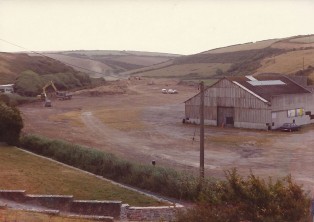 The old hangar – now where the car park and entrance is

The land on which the tourist park now stands was first purchased by Dennis and Rosemary May, who also founded nearby Hendra Holiday Park in Newquay. By the late 70s large parts of the adjoining land was cleared and levelled and gradually the number of caravans and pitches was increased. Over the years that followed we’ve spent thousands of pounds constantly improving the facilities for guests, with new toilet and shower blocks, reception area, hard standing pitches and, in recent years, park-wide WiFi, plush new holiday homes and the introduction of glamping pods.

For around 12 years the holiday park was managed by John and Cathy Case and now their son Chris along with his wife Katy, manage the park. Chris said the secret to success was simple.
“With a lot of holiday parks, the guests are just a number but here it’s about the personal touch we provide,” he said. “Over the years we have found that those who first came as children with their parents are now coming back and bringing their own children with them. It’s fantastic that we have such great customer loyalty and that people have such a good time here that they want to come back again and again. 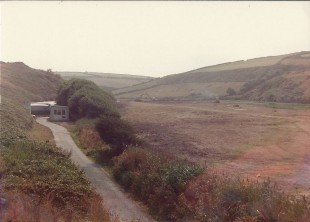 Some the first caravans on our site!

“It’s like one big family; we see a lot of familiar faces and we know a lot of our guests personally. That’s what sets us apart.”

Chris, 40, who has managed the site for the last 8 years, said our park also has one other unique selling point. “This place is all about the location – you’d struggle to find a holiday park anywhere that is so close to a beautiful beach, in a quiet location,” he said. “We’ve also got the amenities of Newquay close by too.”

Despite 40 successful years in business, Chris said planning for the future was key to another four decades of success. “You’ve got to keep one step ahead of the competition and we are constantly looking to improve the offering we provide,” he said. “You can’t stand still – things have changed so much in the industry and continue to do so; what used to bookings taken over the phone has now changed to payments on-line. The advent of social media means there’s also another way to interact with guests, which is becoming more and more popular.” 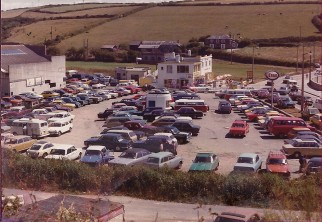 Pictured in ’76 – where our park entrance is now

Our Holiday Park has around 180 touring and camping pitches, with prices starting from just £14 per night. We havek has a range of luxury holiday homes available to rent along with several cosy glamping pods.

To mark our 40th year, we are offering huge discounts for stays throughout September and October!

For stays between 10th September and 21st October the following offers are available:

For more information, check out our fantastic special offers or see our money savings deals below!

We use cookies on our website to give you the most relevant experience by remembering your preferences and repeat visits. By clicking “Accept”, you consent to the use of ALL the cookies.
Cookie settingsACCEPT
Manage consent

This website uses cookies to improve your experience while you navigate through the website. Out of these, the cookies that are categorized as necessary are stored on your browser as they are essential for the working of basic functionalities of the website. We also use third-party cookies that help us analyze and understand how you use this website. These cookies will be stored in your browser only with your consent. You also have the option to opt-out of these cookies. But opting out of some of these cookies may affect your browsing experience.
Necessary Always Enabled
Necessary cookies are absolutely essential for the website to function properly. These cookies ensure basic functionalities and security features of the website, anonymously.
Functional
Functional cookies help to perform certain functionalities like sharing the content of the website on social media platforms, collect feedbacks, and other third-party features.
Performance
Performance cookies are used to understand and analyze the key performance indexes of the website which helps in delivering a better user experience for the visitors.
Analytics
Analytical cookies are used to understand how visitors interact with the website. These cookies help provide information on metrics the number of visitors, bounce rate, traffic source, etc.
Advertisement
Advertisement cookies are used to provide visitors with relevant ads and marketing campaigns. These cookies track visitors across websites and collect information to provide customized ads.
Others
Other uncategorized cookies are those that are being analyzed and have not been classified into a category as yet.
SAVE & ACCEPT